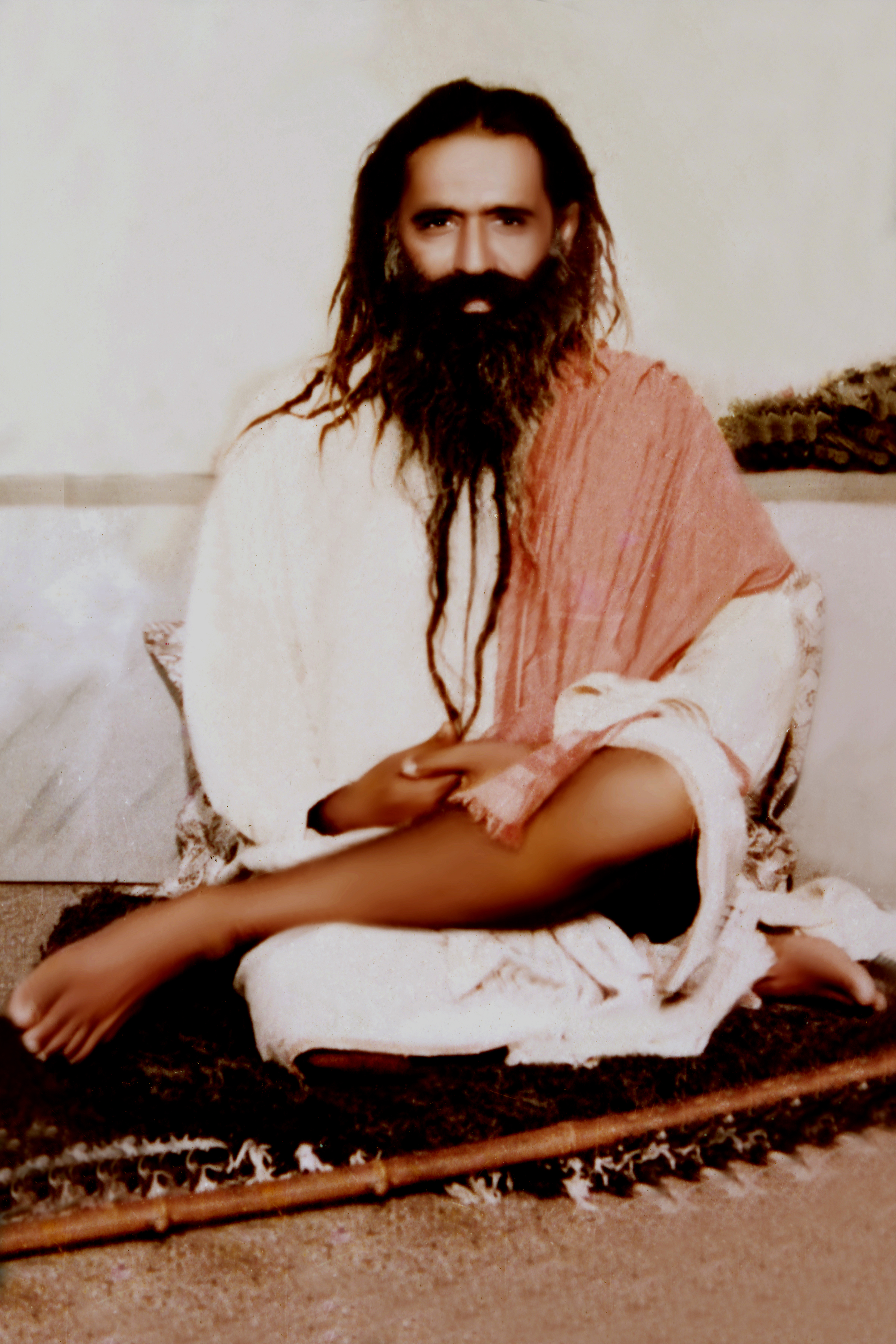 Swami Shri Adgadanand Ji Maharaj came to the recluse saint Paramanand Ji at the age of 23 in November 1955 searching for the truth. The hermitage of Parmanand Ji was in Chitrakoot at Anusuiya, Satna, Madhya Pradesh (India) amidst dense forests infested with wild animals. Living in such an uninhabitable forest in the absence of any facility, rightly reflect that he was an accomplished sage.

Reverend Paramhans Ji received a premonition of Swami Adgadanand Ji Maharaj’s arrival many years earlier. The day he reached the ashram, Paramhans Ji received divine guidance. He told his disciples, “A young man who is ardently seeking to go beyond the impermanence of life must be coming at any moment now.” The moment he cast his eye upon him, Paramhans Ji declared, “Here he is!”

Whenever a spiritual seeker comes in contact with a great sage, it is not immediately possible for him to realise the greatness of the sage. He dreamt of a divine soul and a chaste Brahmin who had told him, “Your Guru has all those qualities that are found in the greatest sages incarnated in this world and he is such sage.” With the strengthening of his faith in the Guru his spiritual pursuit also picked up. Guided under the angelic direction of the Guru he set out on the path of spiritual freedom. The aim was achieved.

Although Maharaj Ji was not interested in writing, following the godly directions he contributed invaluable treatises through discourses and the written word for the social good. The first such publication is ‘Jivanadarsh Evam Atmanubhooti’ – a treatise on the ideal life and attainment of the spiritual realisation of his divine Guru, Paramhans Paramanand Ji. It is also his life sketch and compilation of many astonishing incidents. Many of the people who have seen this unique personality, and for that reason they consider themselves very lucky, are alive today. Secrets of the techniques of spiritual realisation revealed to him by the Guru have also been included in this book. It is a most praised and invaluable book in our time, on the subject of spirituality, and a spiritual student and thinker would consider himself or herself greatly honoured by studying this book.

The unique commentary on Geeta ‘Yatharth Geeta’ was awarded and honoured with ‘Bharat Gaurav’ during the Maha Kumbha fair organised on the all India level at Haridwar in April 1998. Divine direction has become instrumental in the creation of this book. Since the thoughts of the Yogeshwar Lord Shri Krishn have been expressed in their as it were forms, it is called ‘Yatharth Geeta’.

For more than five thousand years after Lord Krishn this divine exposition of ‘Yatharth Geeta’ has become a holy message of equality and emancipation for mankind. Following the principles laid down in the Geeta, one can get rid of one’s illusions and set out to realise the divine truth.

Maharaj Ji has tackled all the questions of orthodox society through his work ‘Shanka Samadhan’. The broad spectrum of questions and their scientific explanations help you to reach the doors of the truth with ease. After the initiation into spiritual pursuits, divine invocation and signs become evident through vibrations of the limbs. This has been referred to in the book, ‘Why do the Body Parts Vibrate? What do they say?’

Exemplifying the unanimity in the thoughts of the great angelic messengers of the world he has incorporated the verses of the great sage Kabir, his spiritual wisdom through the medium of an audio cassette ‘Amrutwani’. No great sage has been able to encompass the experiences of his spiritual pursuits in text during his lifetime. He was not able to write and get his work published earlier because of his restless temperament, difficulties of publishing and social and administrative hostility. The sub-tenets, which he formulated in protecting the truth, became his protective doctrines while writing. Swami Shri Adgadanand Ji Maharaj is an illustrious saint who has had an opportunity of putting his discoveries into words and you are able to experience the Truth without any contamination.

Only a contemporary saint can find a true solution for the social good, solutions for our questions and our problems. The dead do not rule from the graves. Having reverence for the departed, guidance from them is acceptable to a certain extent, and may be natural enough; however, for contemporary problems take guidance from some great saint only.

Swami Ji has never advanced the claim that he has attained divinity. He merely presents to society whatever invaluable jewels he has been able to receive in his quest for the Ultimate Truth.

Swami Ji has spent fifteen years of his life in deep meditation in proximity of his Guru. There are many present who have seen him forsaking food, water, sleep, etc. for months together.

Since the Nirvana of Gurudev in 1969, for the last thirty years, wherever Swami Ji has stayed, several cloistered holy people, thousands of devotees from all regions and plenty of grief-stricken people had the unique opportunity to regularly interacting with him and seeking his blessings. Making continuously the necessary arrangements for people travelling from very long distances, providing free service of snacks, food and rest without ever seeking help from the others is certainly a miraculous feat.